More and more climbers are combining their ascents with paragliding. Usually they do the obvious: jump off a peak they just climbed. Sometimes they paraglide from part of the mountain.

But Will Sim and Fabi Buhl may have started a new trend. They recently made the first ascent of Gulmit Tower, a 5,800m granite spire in Hunza, by gliding to its base from the air and then climbing it. From the summit, they abseiled, then returned by paraglider to their hotel!

“What would normally be a four-day approach, [we did] with our wings in an hour and a half, from the city to the base of the road,” Sim reported. They then climbed the “phenomenal” line to the tower.

During the climbing phase. Photo: Will Sim

The climbers, accompanied by Aaron Drugati and photographer Jake Holland, spent five weeks paragliding around Hunza. They didn’t need a base camp. They mostly stayed in a hotel in Karimabad and flew wherever they needed.

When they set their sights on Gulmit Tower, they carried all the necessary equipment in their paraglider harnesses, with the help of the other two pilots. Once they landed, they continued their approach on skis.

After resting in a tent at the foot of the mountain, the pair of climbers left at 2 a.m. They put on crampons up to a pass, from where they began the climb. They reached the top, hit, then returned to their hotel the same day, they said escalade.com. 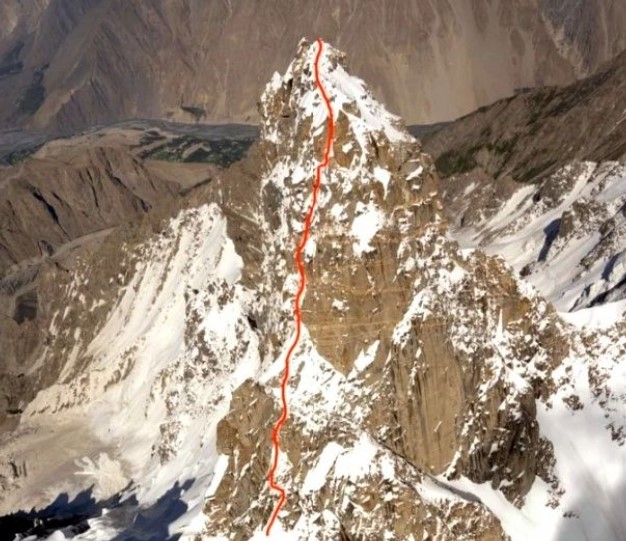 On Gulmit Tower, Aaron Drugati did not climb, but rather performed a crazy “combo” flight with his skis and the subsequent descent (see below). Previously, in the same expedition, Drugati broke a record by making the longest flight ever in Asia – 312 km, over the Hispar glacier.

Why is this important?

Gulmit Tower had been attempted before, but never successfully. Its excellent granite was perfect for climbing, but the treacherous and very broken glaciers leading up to the tower had caused the failures.

Many unclimbed mountains in the Karakoram present similar barriers to access. This technique would facilitate the first ascents by allowing safer access and exit.

Cross-country paragliding, combined with skiing and mountaineering, multiplies the possibilities of exploratory expeditions. This shows that adaptation is key to keeping the adventure alive.