France and Italy, where no ski areas are currently open, will resume snow sports accessible by lift this weekend.

In Italy, the Passo Stelvio ski area is also set to open.

Les 2 Alpes claim that Europe’s largest glacier and ski lift company, SATA, has carried out work in the glacier’s snowpark.

A boardercross was built for summer training and to host international competitions. A smaller boardercross has also been set up for families, as well as a green run between the boardercross and the snowpark. Beginners and those who just don’t feel like getting some fresh air can take it to watch the runners in the park.

Les 2 Alpes had an ice cave on the glacier at 3,200 meters. It is now moved to 3,400 meters and adjoins the footbridge (Le Belvédère des Écrins) and an orientation table. This area is accessible to skiers but also to pedestrians.

The number of summer ski areas, and in most cases the length of the summer ski season, has been decreasing year on year since the late 1990s.

Last summer, areas that are still open in the Alps in summer often have to end summer skiing early because the summer sun melts all the snow from the ice. 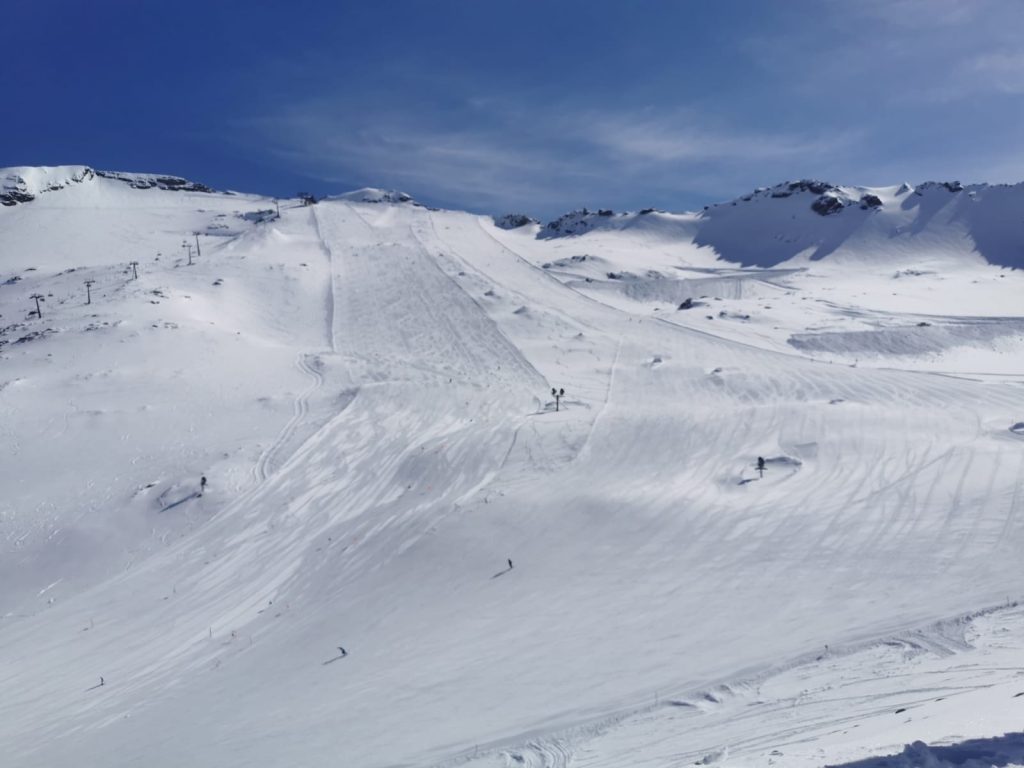 So far in 2022, the only summer ski area in the United States, Beartooth Basin, has announced that it will not open this spring and summer because winter snow accumulation has not been adequate. In Europe, the Kaunertal glacier in Austria closed over the weekend, two weeks earlier than expected, saying,

“Due to winter with little snow, persistent warm temperatures and rain showers up to high altitudes, we have to stop the operation of the ski lifts for skiers…”

The Molltal Glacier (pictured above earlier this month), which was Carinthia’s only summer ski centre, said it would not open for snow sports this summer, but would rather in September or October.

Currently, eight ski areas are open in Austria, Norway and Switzerland, including Crans Montana, Engelberg, the Hintertux, Kitzsteinhorn and Stubai glaciers as well as Zermatt.

Summer ski areas due to open in June include Tignes, Val d’Isère and Cervinia.

Les 2 Alpes will be open from Saturday May 28 to Sunday August 28, 2022, with the glacier set to remain open until August 15 for skiers and snowboarders. Passo Stelvio usually stays open for six months until early November.