Rainfall over the past few days 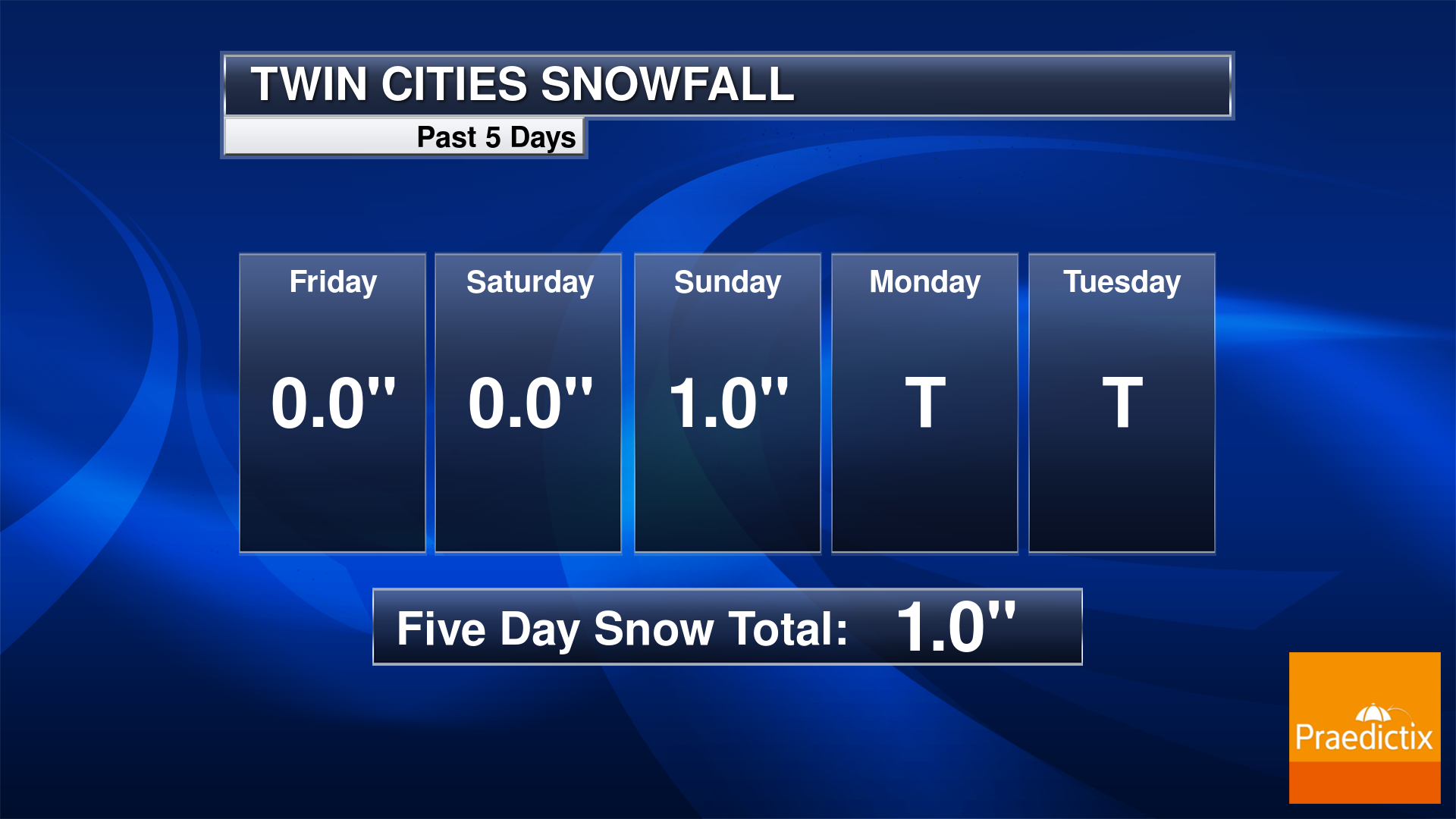 So far we have continued our wet and somewhat snowy streak through the early days of April. From April 1 (Fri) to April 5 (Tues), we collected a total of 0.63″ of liquid precipitation and 1″ of snow at MSP. 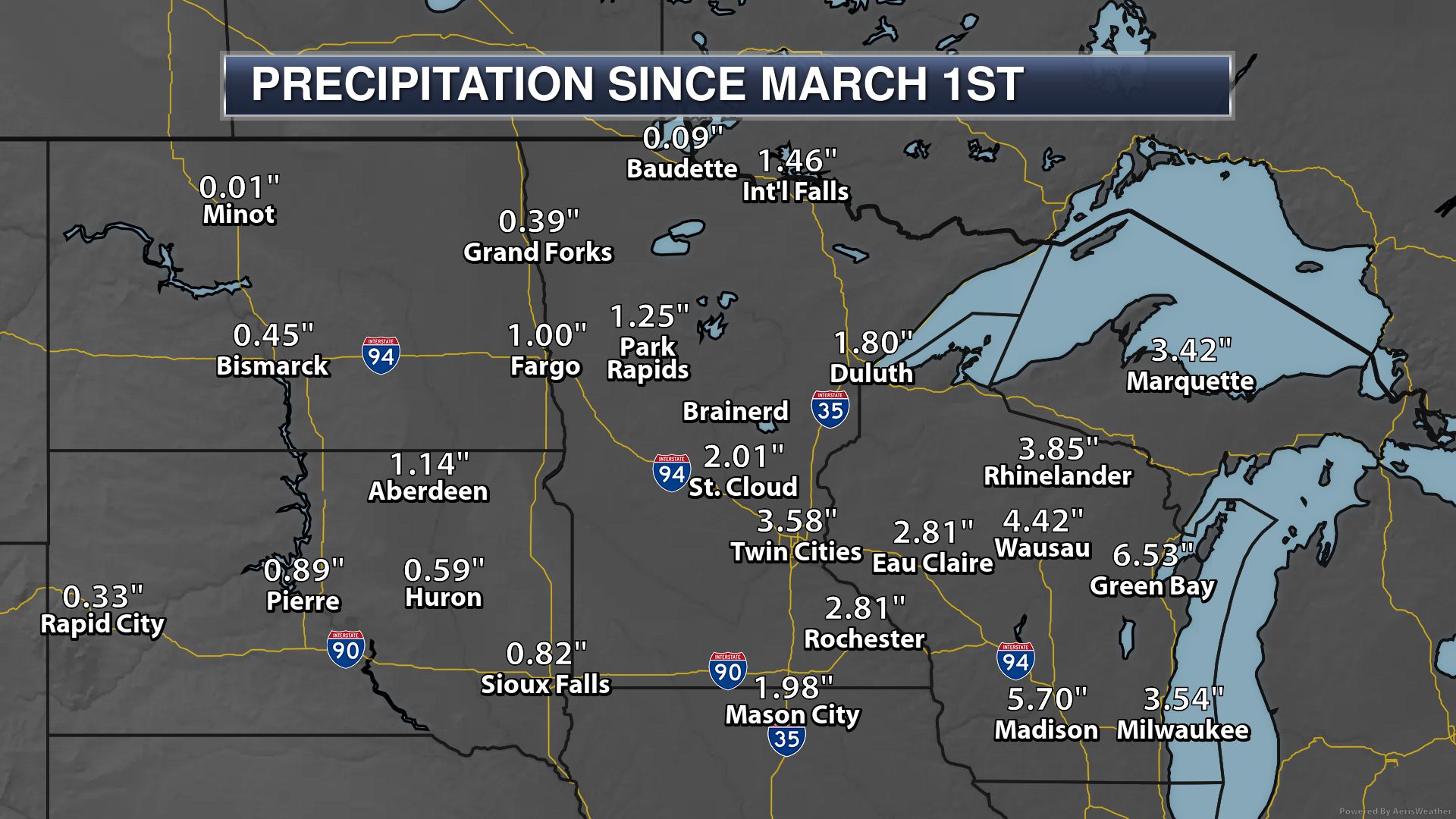 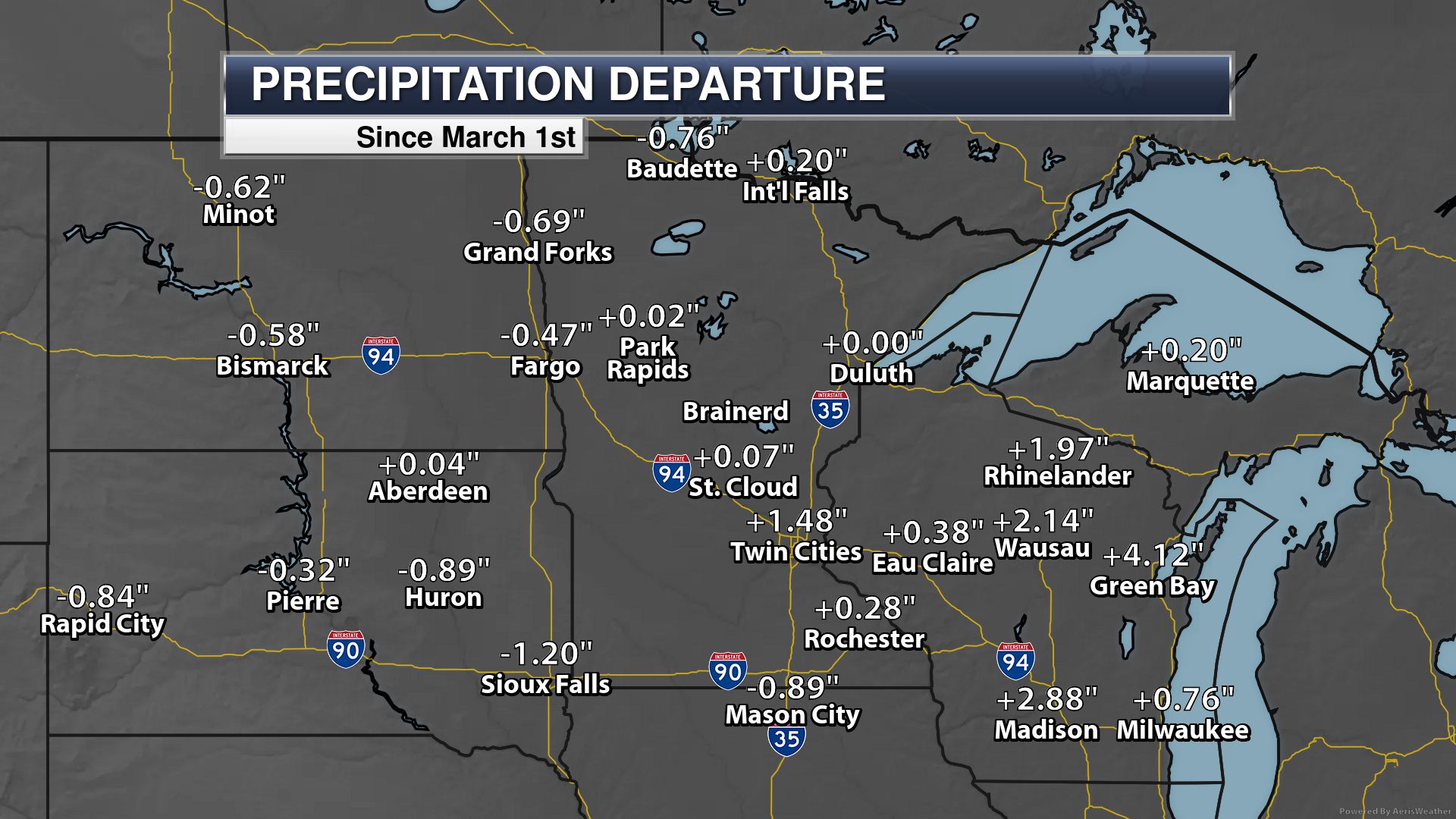 Looking at what we’ve picked up in terms of liquid since March 1 (that’s rain and melted winter precipitation), we’re almost an inch and a half above average through April 5 here in the subway . In fact, most of the state is above average – the exception is in the northwestern parts of the state and in eastern North Dakota, where areas like Baudette and Grand Forks are more than half an inch below the average.

Windy with more rain/snow on Thursday

The system that’s been hanging around the upper Midwest will continue to do so through Thursday evening, at least bringing a chance of scattered rain and snow with it before precipitation finally moves out of the state early Friday. 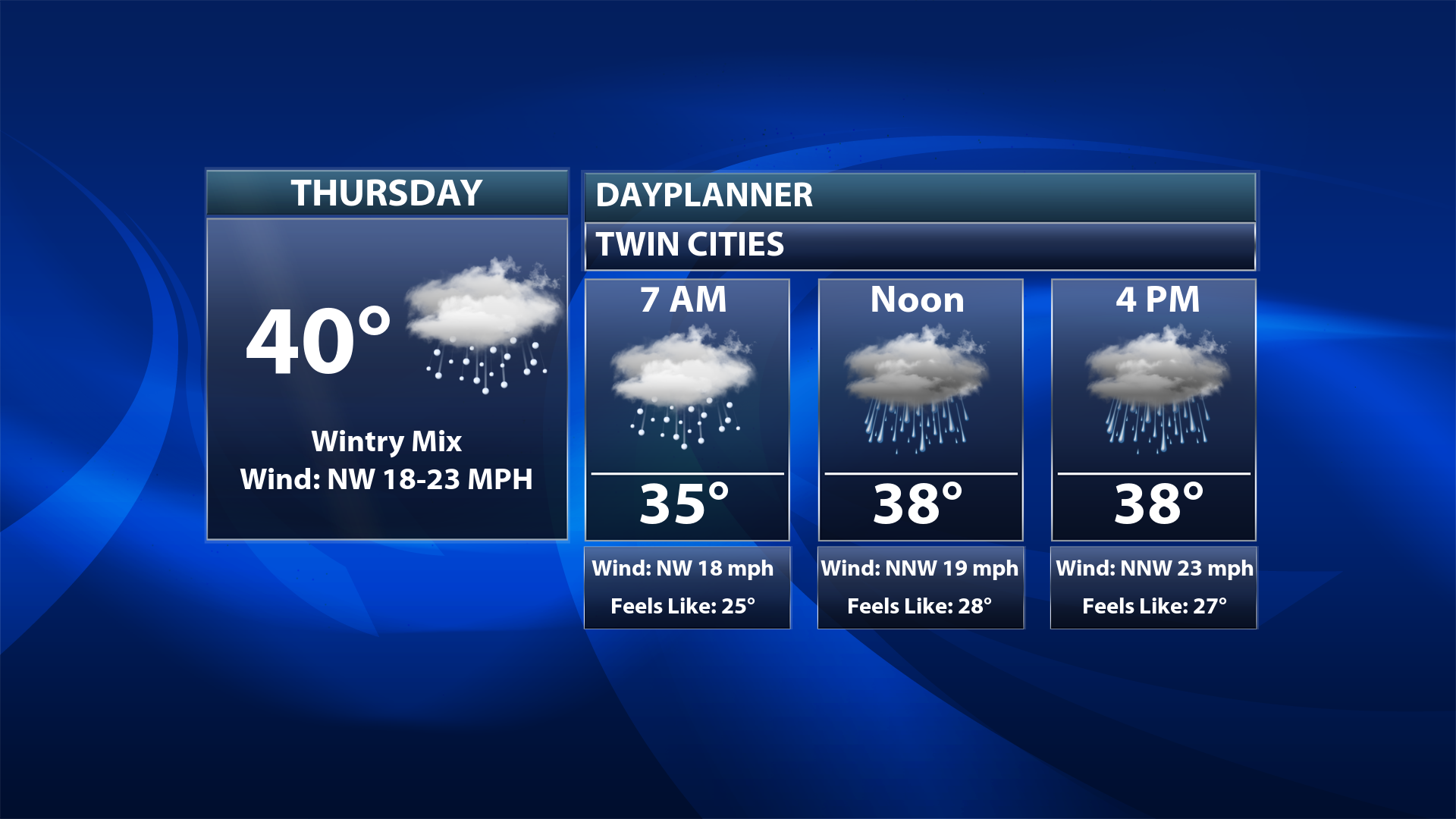 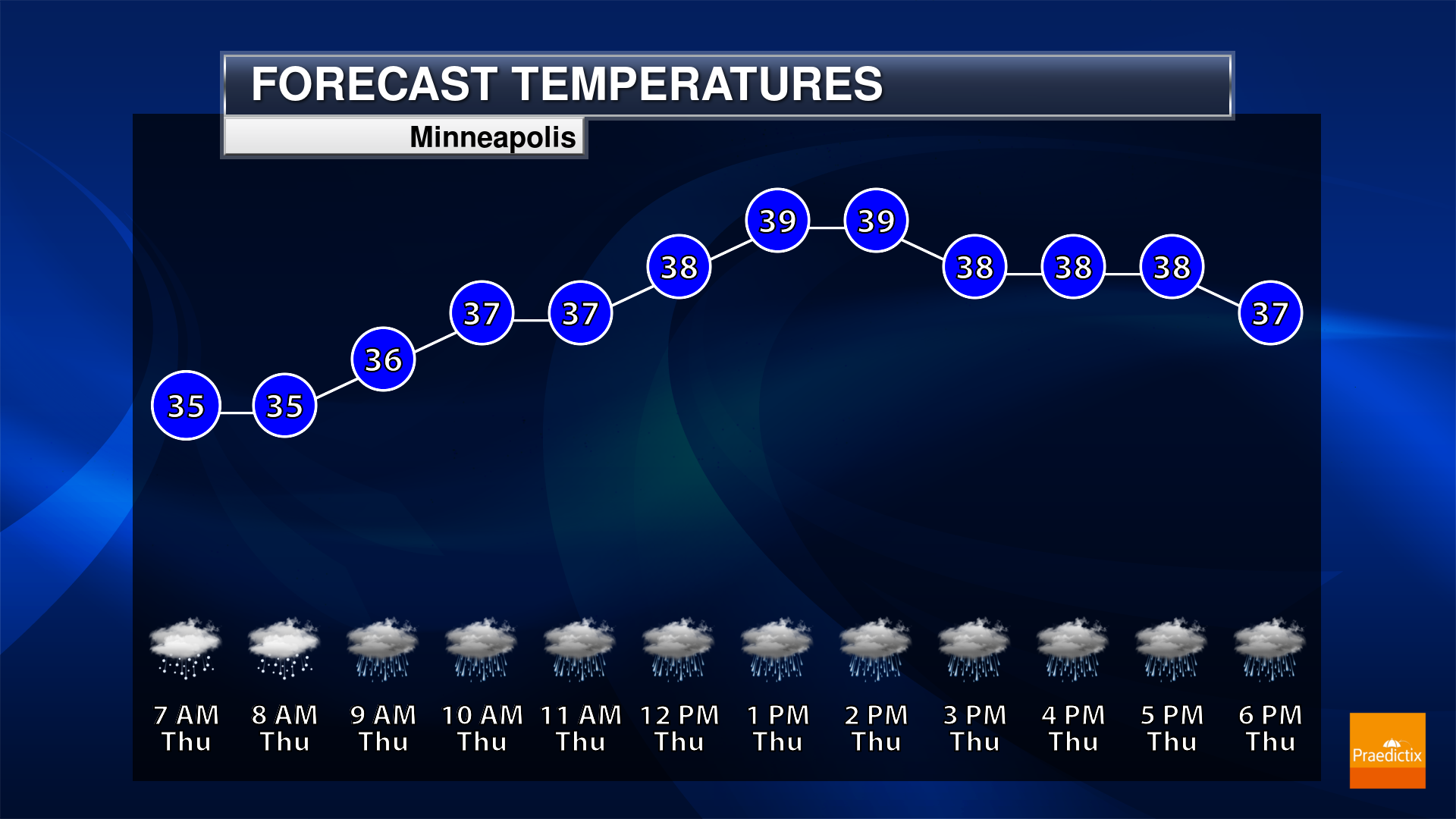 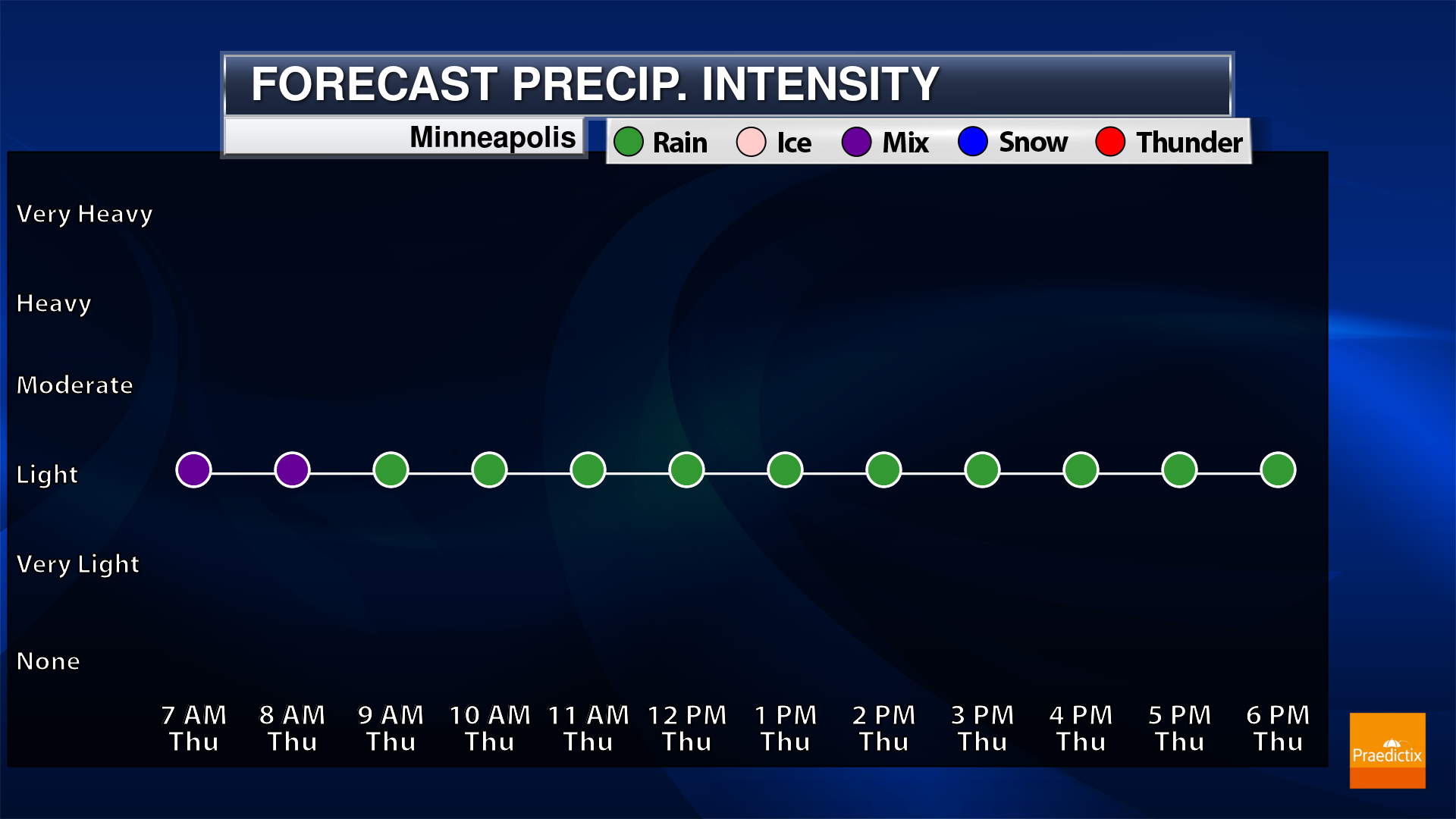 As far as the metro is concerned, precipitation will start the day as a mix and/or light snow before changing to rain during the morning hours. We’ll start in the low to mid 30s and only go up to around 40F for a max. A strong northwesterly breeze will feel like you’re in the 20s for much of the day. 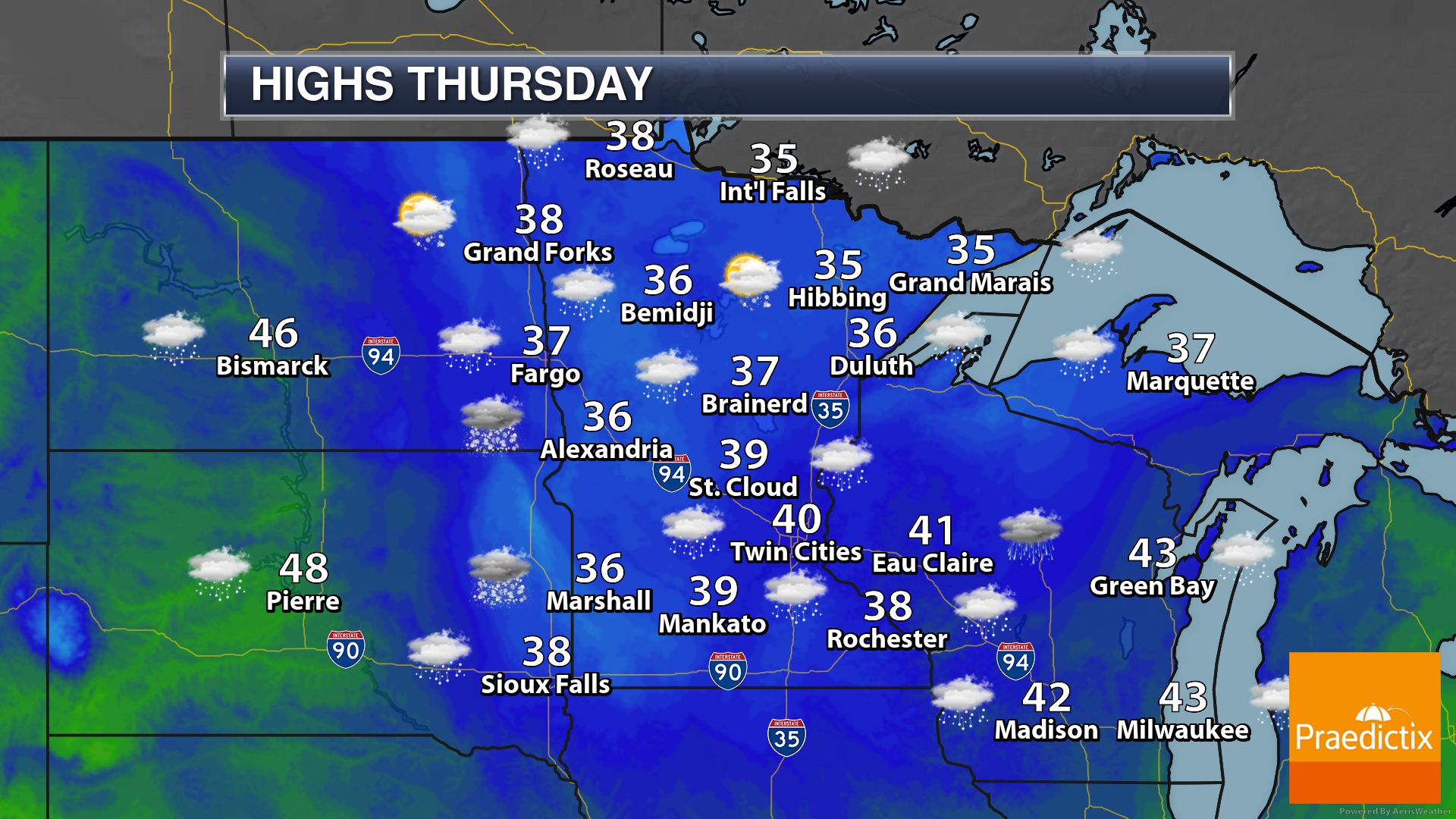 With this low persistence, at least scattered precipitation (rain/snow/mixed) is expected across the state. Highs will be mostly in the 30s – at least 5 to 15 degrees F below average. 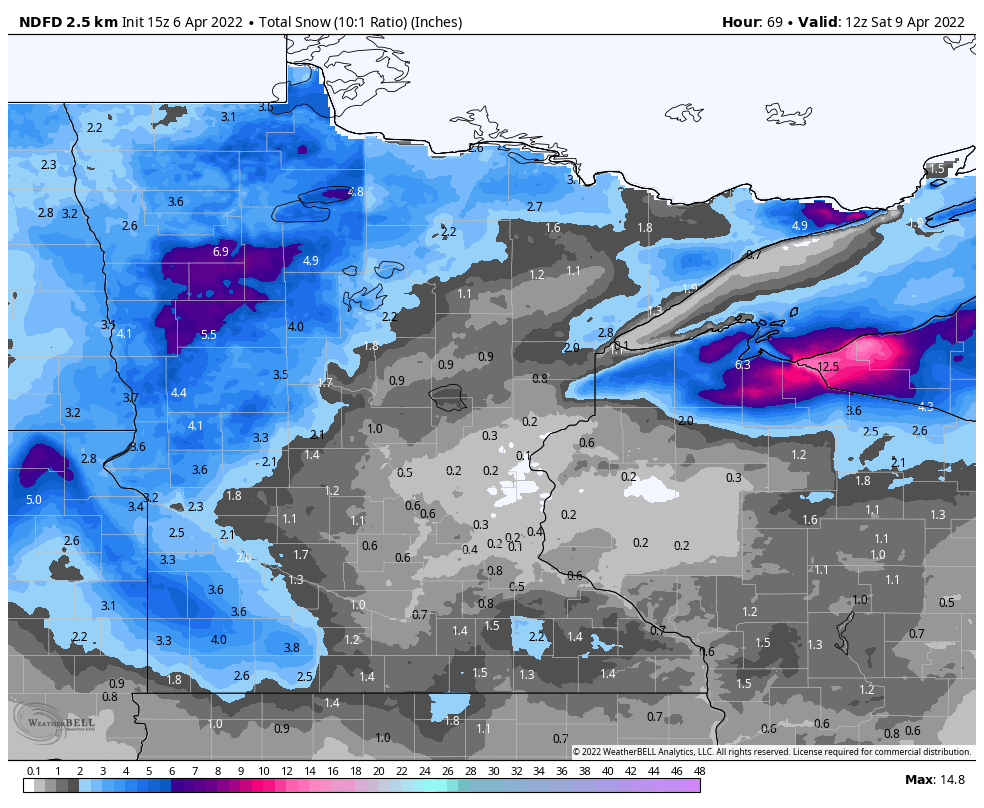 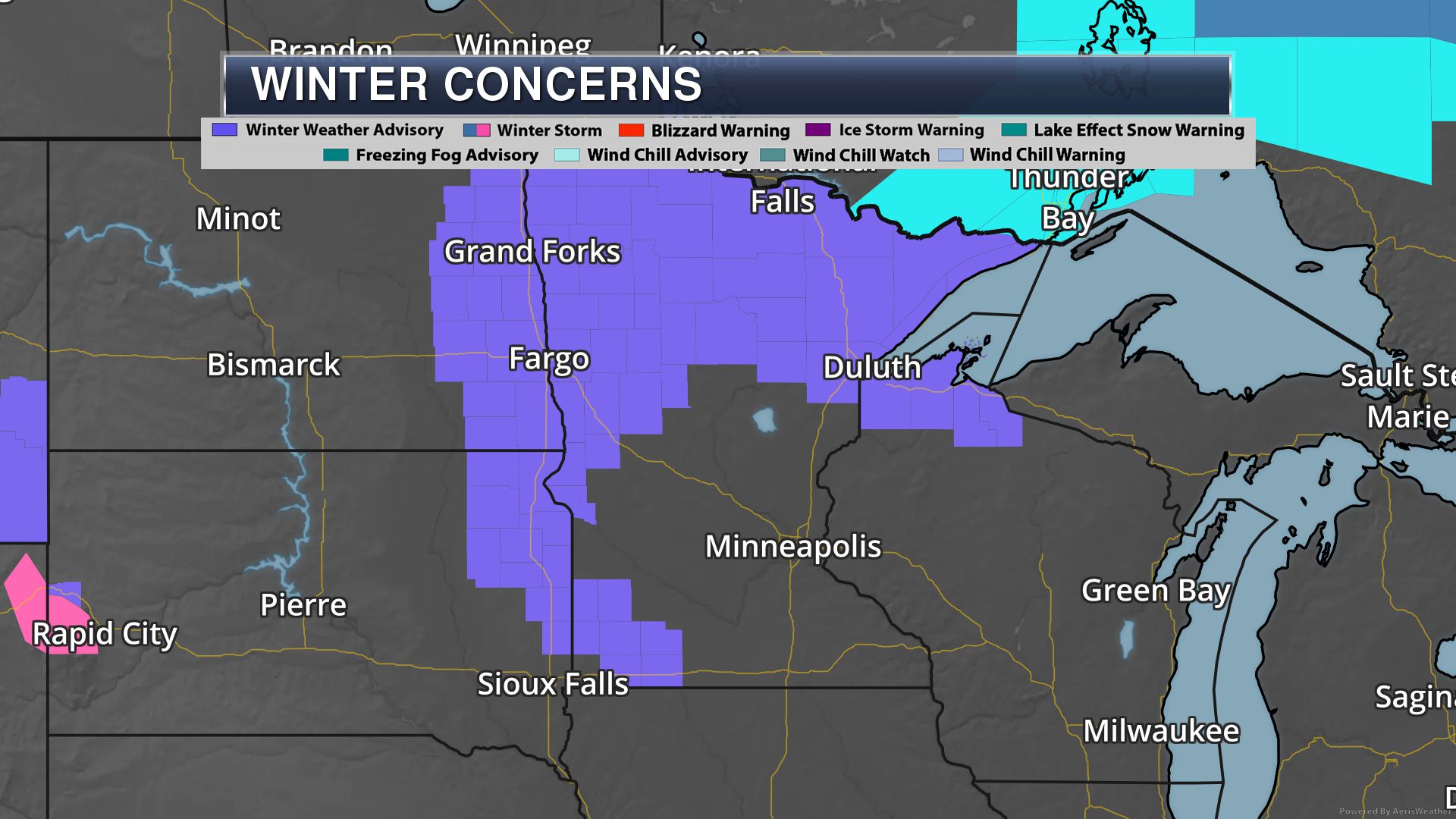 A few 6″+ patches of snow are possible as we finish Wednesday and head into Thursday – one in the northwest regions and another in the Arrowhead. However, many western and southern regions northern Minnesota could see at least 1-4″ of snow before this system finally comes out this weekend. Winter weather advisories are in place. 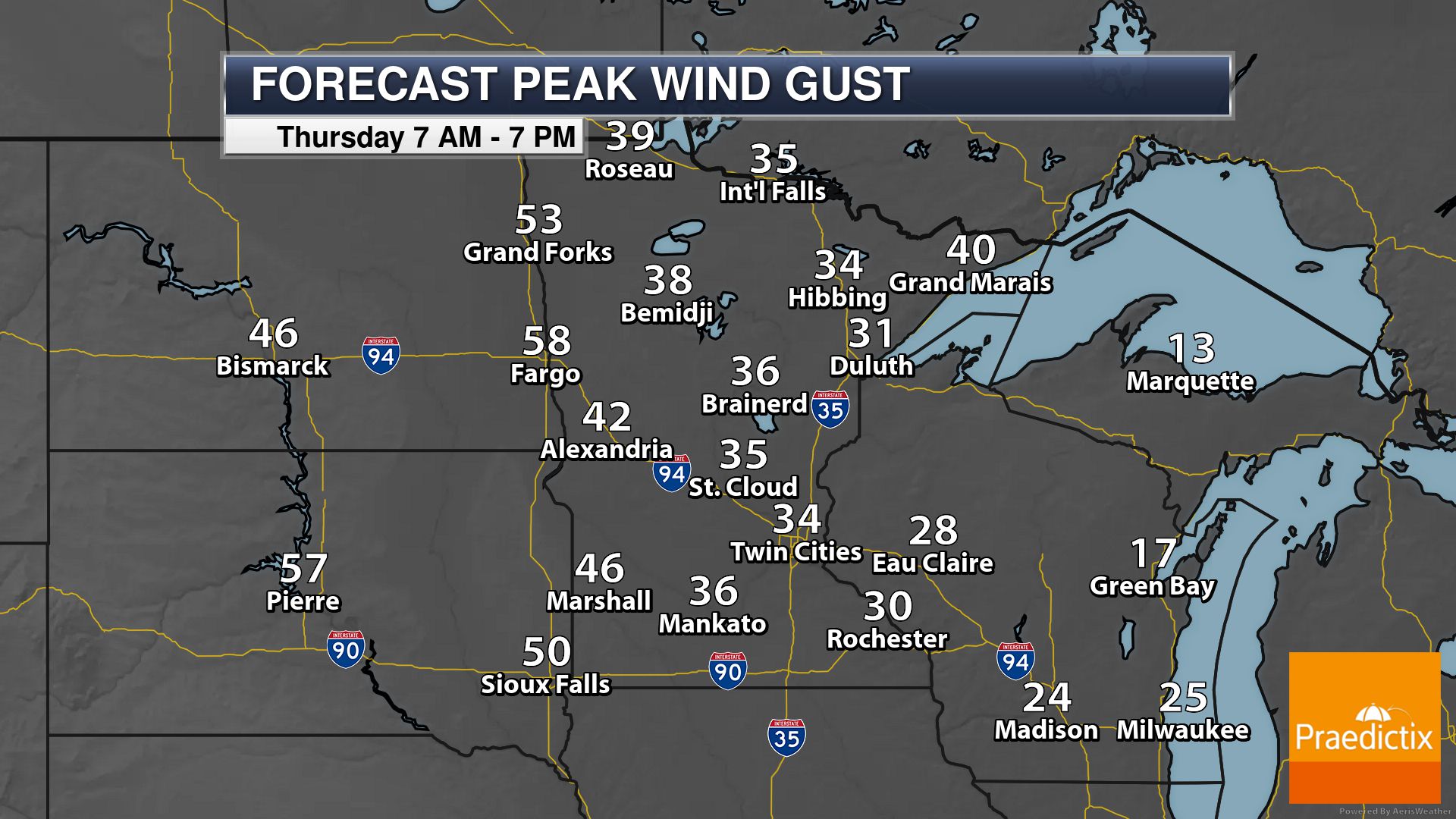 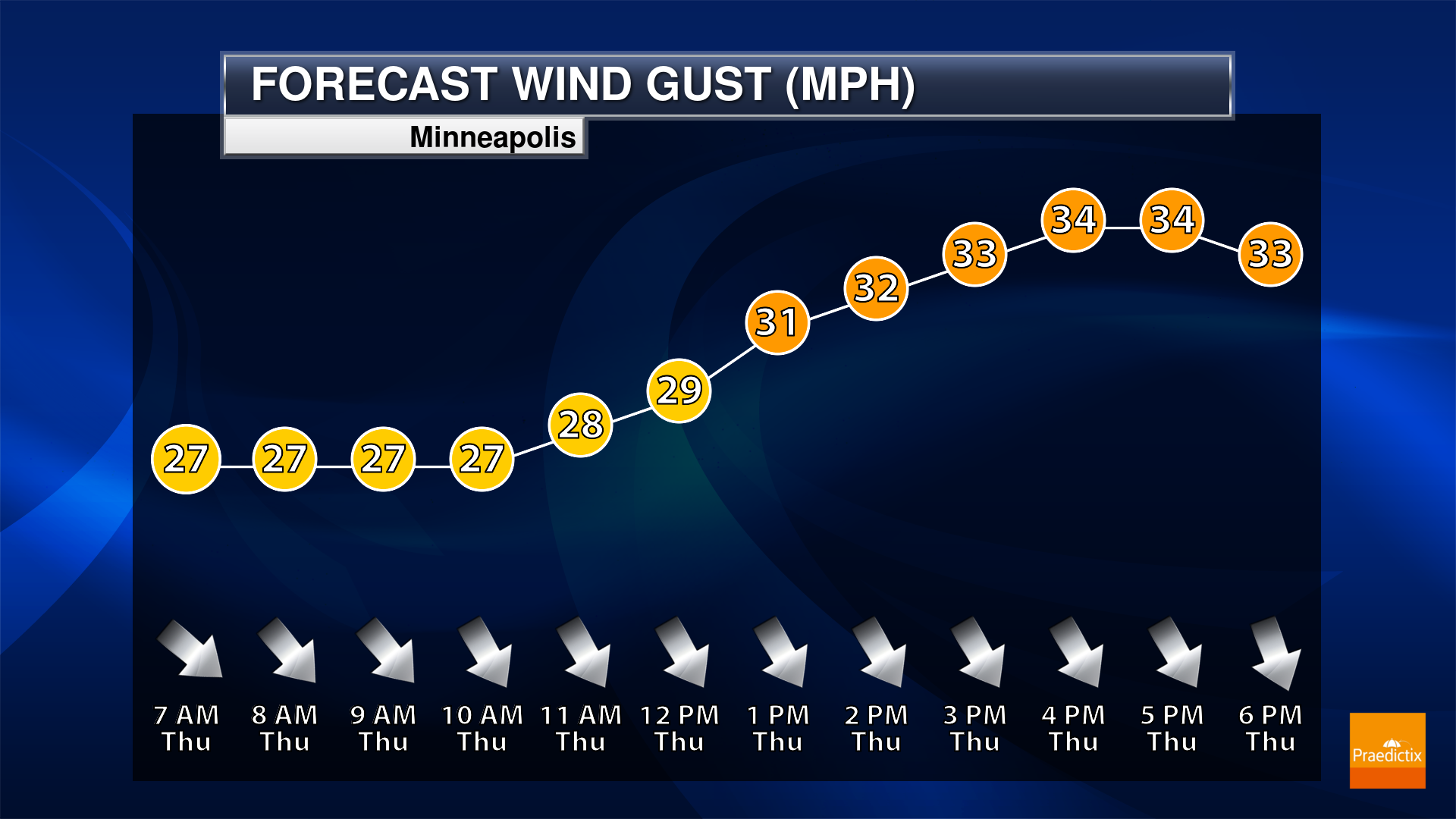 We will also see strong winds as we head northwest on Thursday. In the Twin Cities, these winds could be above 30 mph in the afternoon and we could see overall gusts of over 50 mph in the Red River Valley. 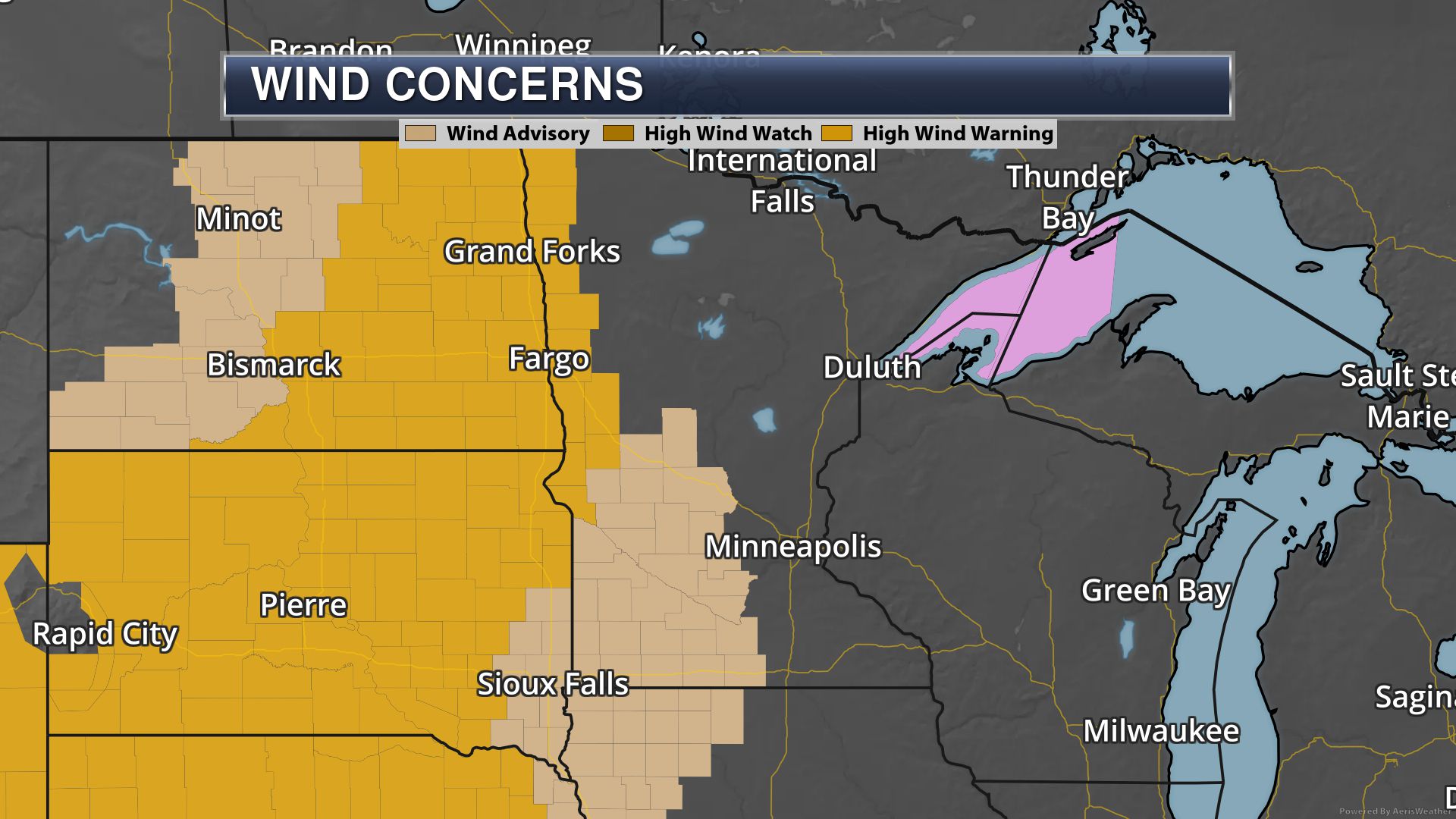 Due to the expected strong gusts of wind, numerous wind advisories and strong wind warnings are in place for western Minnesota in the Dakotas. 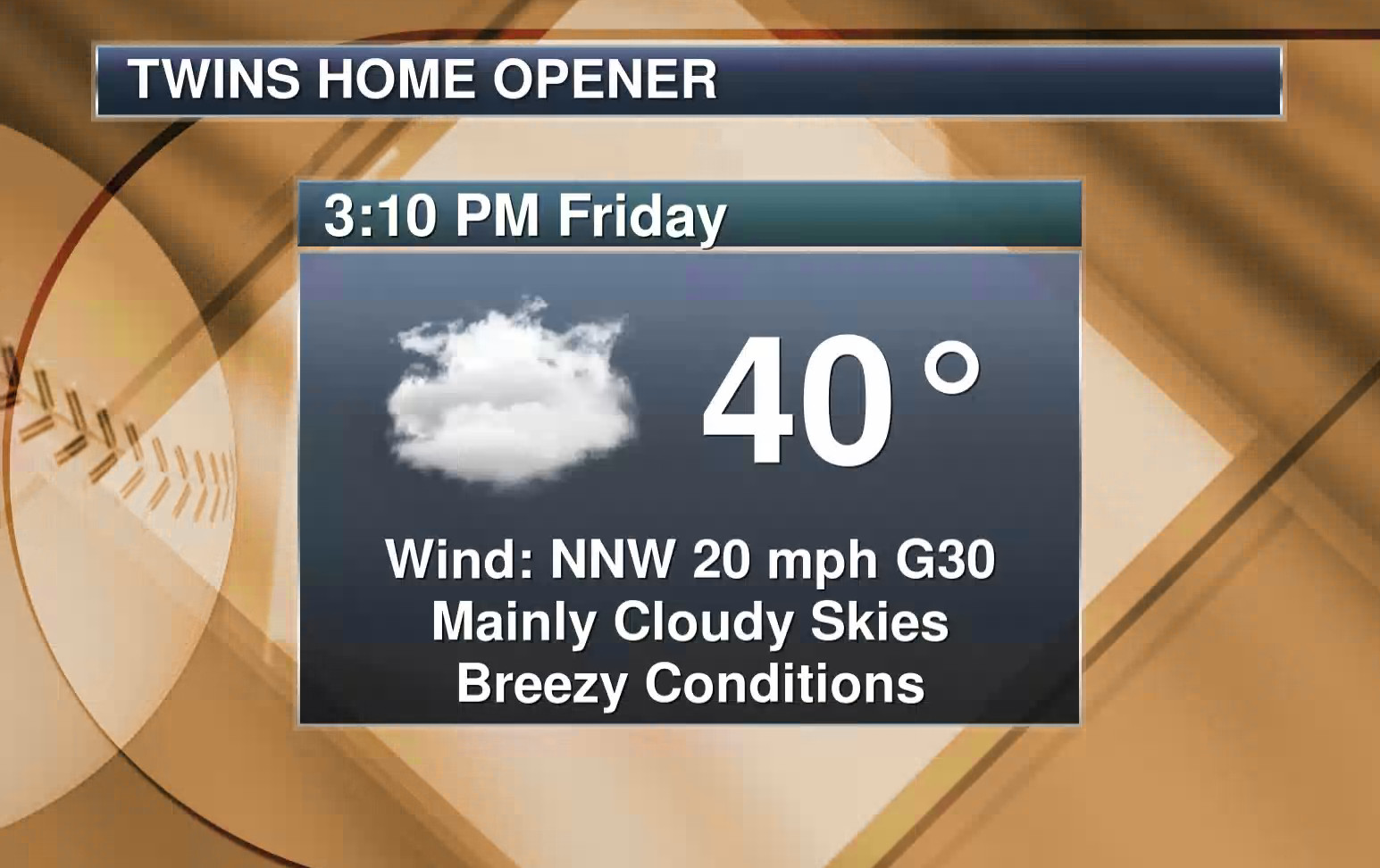 As you may have already heard, the Twins Home Opener has been postponed from Thursday to Friday due to the expectation of precipitation and cold temperatures. Although we’ll get rid of the precipitation by Friday afternoon, it’s still going to be cloudy and cold, especially considering that wind! We could see gusts to 30 mph on the first pitch Friday afternoon.

Warmer weather for the weekend 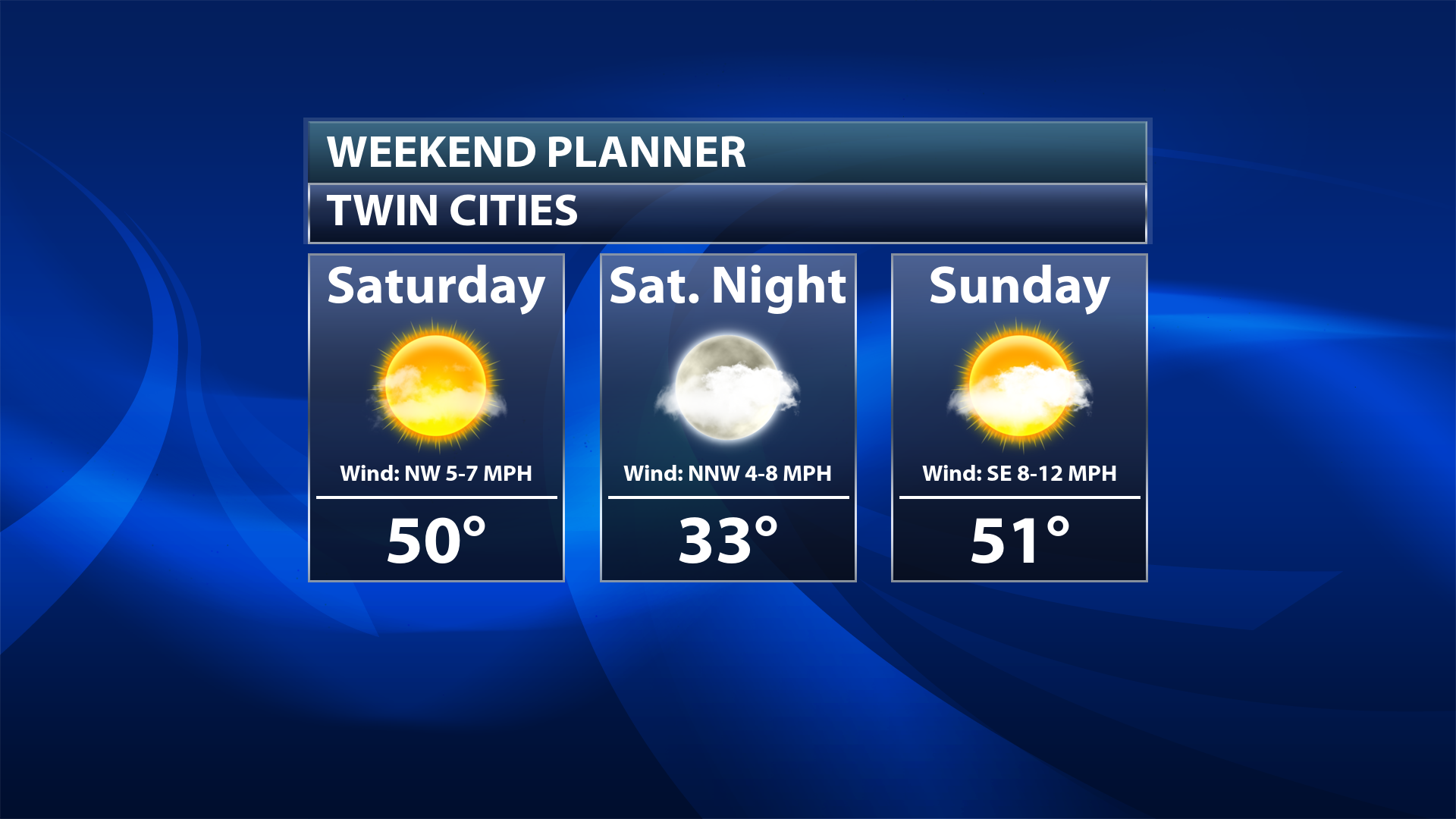 The good news is that if you’re heading to the games this weekend, better weather will be in store. Saturday and Sunday highs are expected to hit the 50s with plenty of sunshine on Saturday but more filtered skies on Sunday. Take advantage of the dry weather this weekend – more rain looks possible early next week.

The reluctant spring of 22
By Paul Douglas

I want to take this opportunity to apologize for our slow spring – the slush, the wind chill, the general discomfort. A few weeks ago, I accidentally pressed the flashing red button on my Doppler radar and it all went wrong. The same thing happened in 2018 when we saw 26″ in April, but hopefully this month will be a faint echo of 4 years ago.

Data from the Minnesota DNR indicates that the Twins’ coldest home open was in 1962 (34F high). Sleet (ice pellets) was reported in the first game of 1972 at the Met Stadium. The Twins made the right choice by moving the opener to Friday. Today will be miserable – Friday should be more tolerable.

A mix of windblown snow and rain will delight Minnesotans today, with some slush on lawns again tonight. Skies are expected to clear Friday afternoon with lows of 40°C and a strong breeze at Target Field. No baby.

A beautiful weekend gives way to another major rainstorm next week, with 1-2 feet of snowfall possible across the Dakotas.

Spring is coming, but I’ll be sacred if I know when. 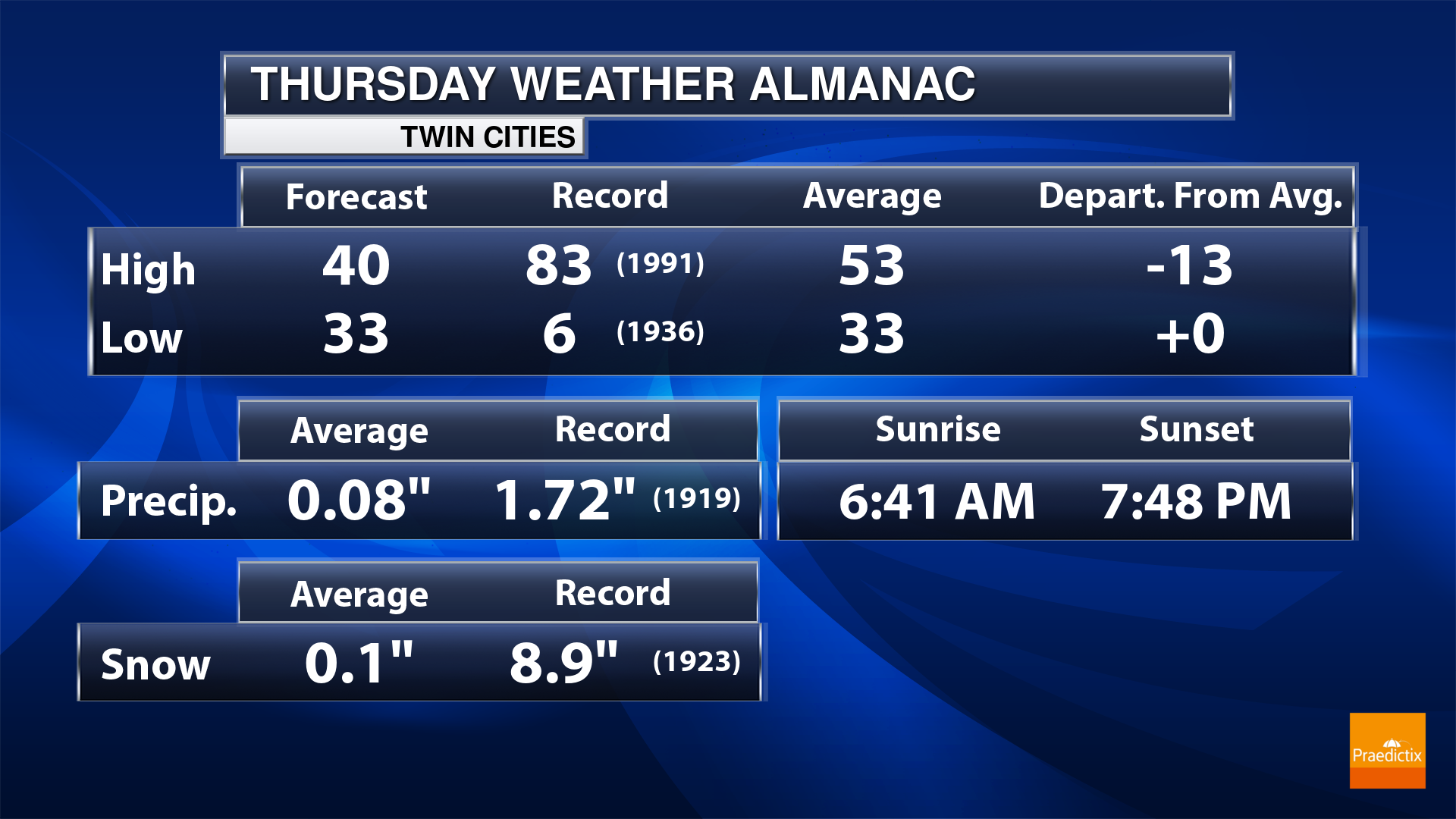 *Duration of the day: 13 hours, 5 minutes and 58 seconds
*Daylight WON since yesterday: 3 minutes and 5 seconds

This day in weather history
April 7

1857: A cold spell hits the United States, with snow reported in all states. 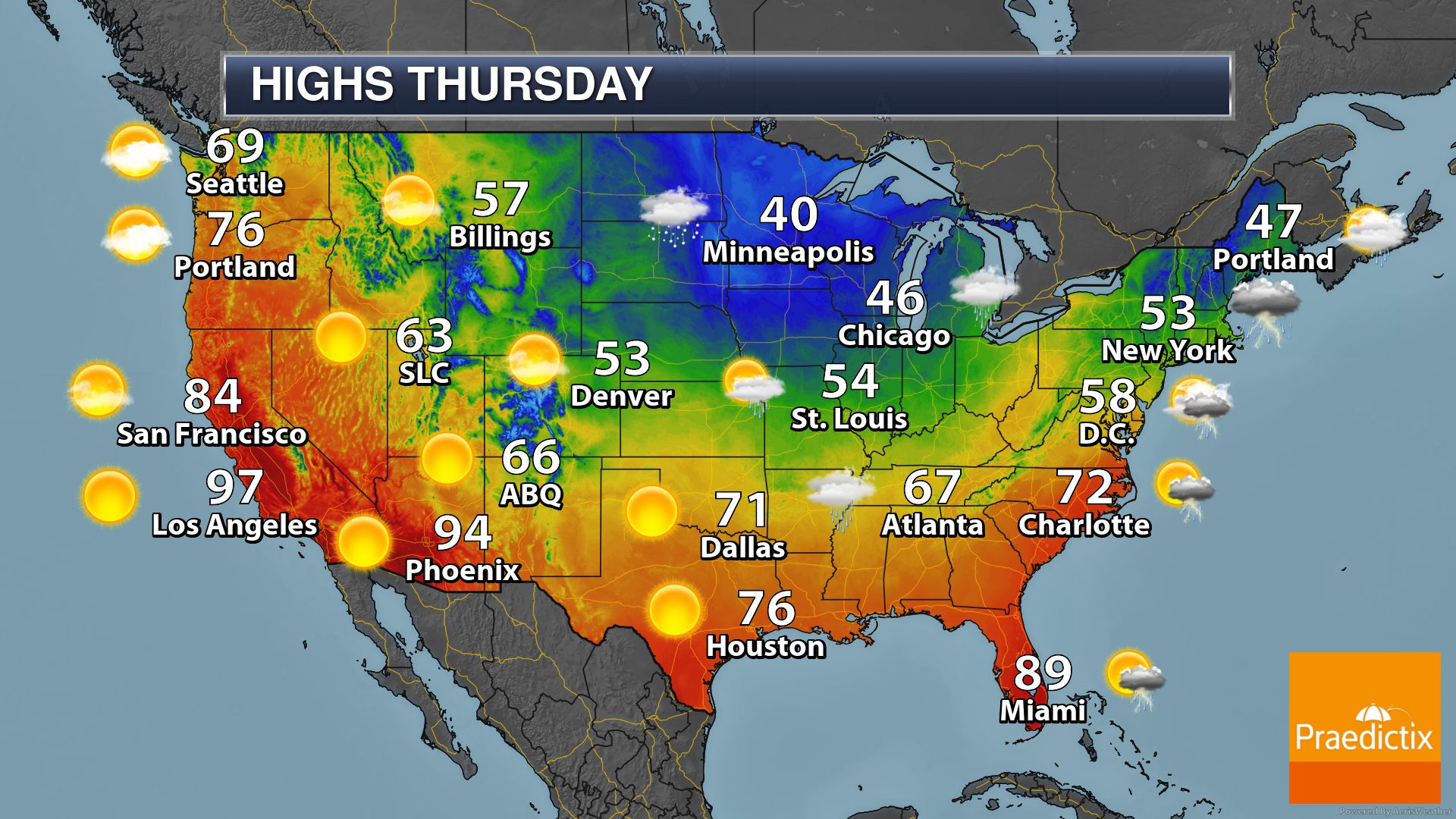 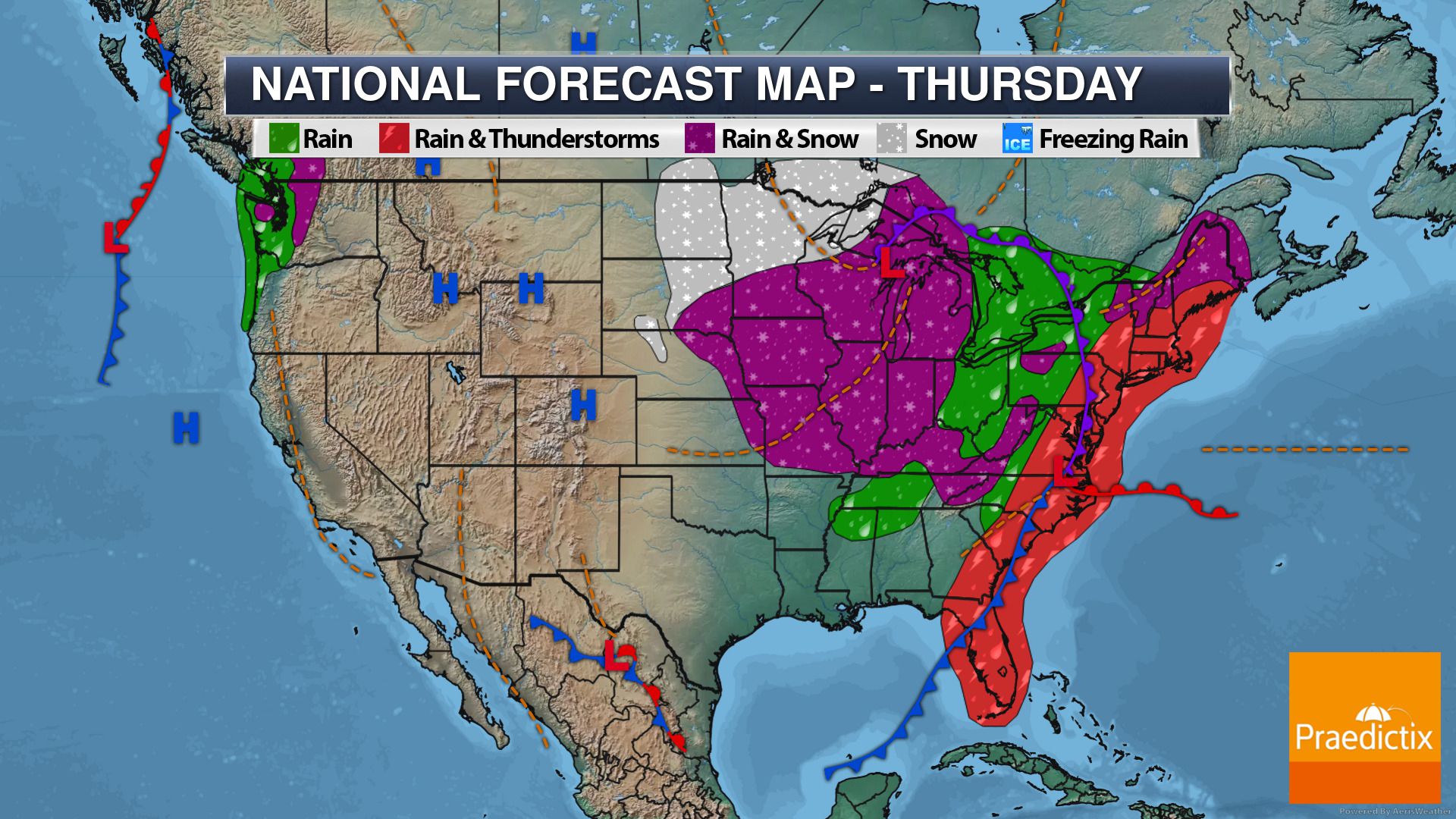 The cold front that produced severe weather in the southern United States on Wednesday will continue eastward Thursday, with storms on the east coast. The associated depression will still persist in the Great Lakes, with a chance of rain and snow there. Late Thursday a system will approach from the Pacific Northwest with rain and snow aloft. 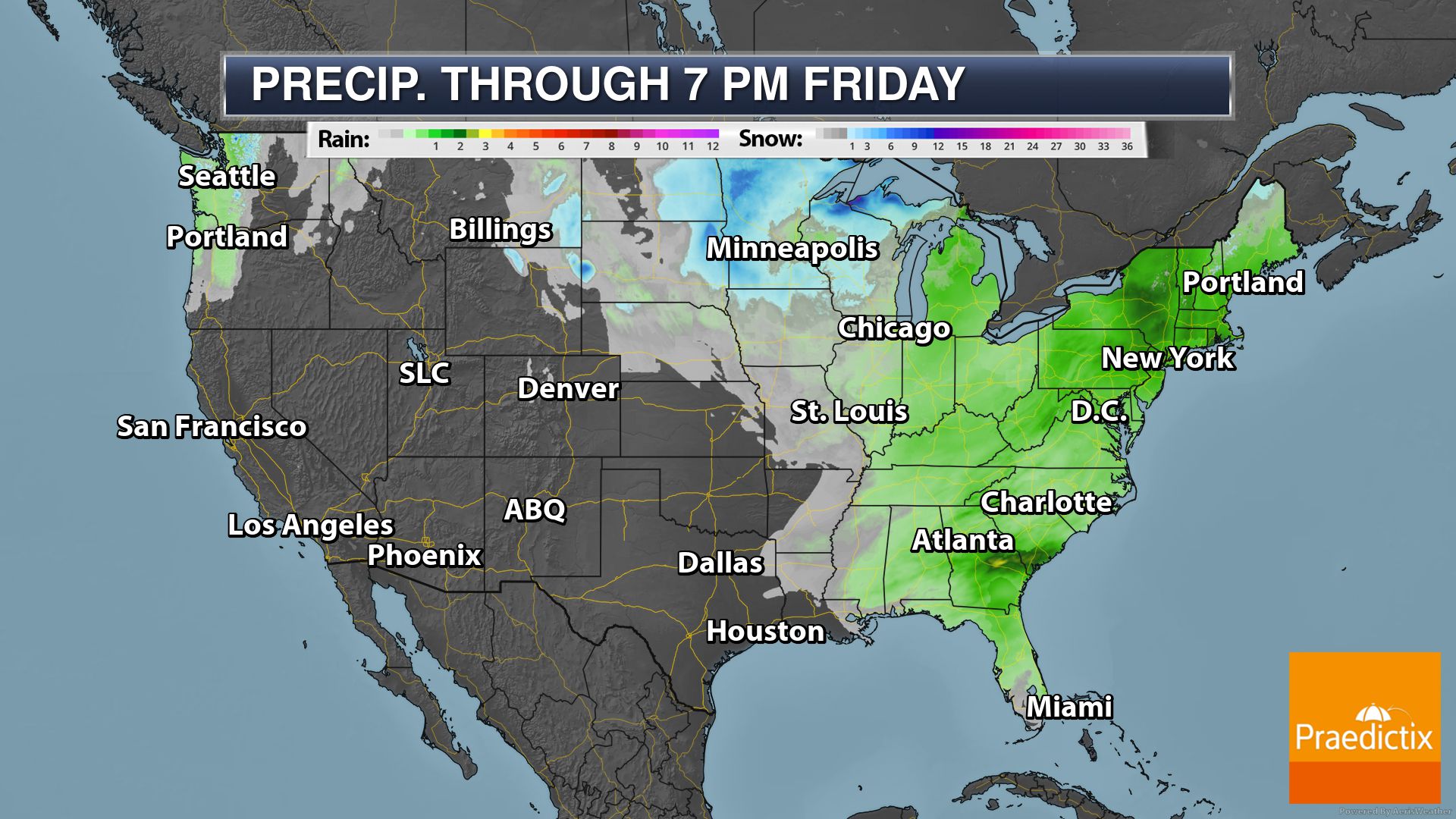 The heaviest snow Wednesday through Friday will be in parts of the Upper Midwest/Great Lakes where a foot or more could fall in isolated locations. Heavy rain will be possible in the eastern United States, with counts of 1 to 4 inches possible.

Climate change could cost US$2 trillion every year by the end of the century, White House says

More from CNBC:Floods, droughts, wildfires and hurricanes worsened by climate change could cost the US federal budget about $2 trillion a year – a 7.1% loss in annual revenue – by the end of the century, the White House said in an assessment Monday. Analysis from the Office of Management and Budget, which administers the federal budget, also warned that the US government could spend an additional $25 billion to $128 billion each year on areas such as coastal disaster relief, flood insurance, crop insurance, health insurance. , wildfire suppression and flooding at federal facilities. “The fiscal risk of climate change is immense,” wrote Candace Vahlsing, OMB’s deputy climate director, and Danny Yagan, its chief economist, in a blog posted on Monday.“

The Ski Wax Industry is Struggling to Leave PFAS Behind

Learn more about the Marketplace: “On a hot, muddy day in February, Eric Straubhar waxed a child’s ski wax. Straubhar runs the rental store at Bogus Basin, a ski resort outside of Boise, Idaho. He said it had been a few years since he first heard that PFAS was a problem in high-end ski waxes. From what he knew, these “fluorinated” additives or PFAS had been present in ski equipment in one form or another for decades. “There were a myriad of powders and different things and then waxes,” he said. PFAS, an abbreviation for perfluoroalkyl and polyfluoroalkyl substances, is a class of chemicals often referred to as forever chemicals. They’re man-made, have been around the globe, and don’t break down in the environment – or in our bodies. They can cause cancer and other diseases and weaken the immune system, among other things.“

The hunger crisis in Africa affects more than 300 million people

More from The Root: “A quarter of Africans are at risk of hunger due to climate change, conflict and rising food and fuel prices, Reuters reported. The International Committee of the Red Cross estimates that around 346 million people in Africa are at risk of hunger. The ICRC’s director of global operations, Dominik Stillhart, said food insecurity has plagued many countries where the organization works and people are affected by armed conflict, pushing them “tilt into near-famine conditions “.“